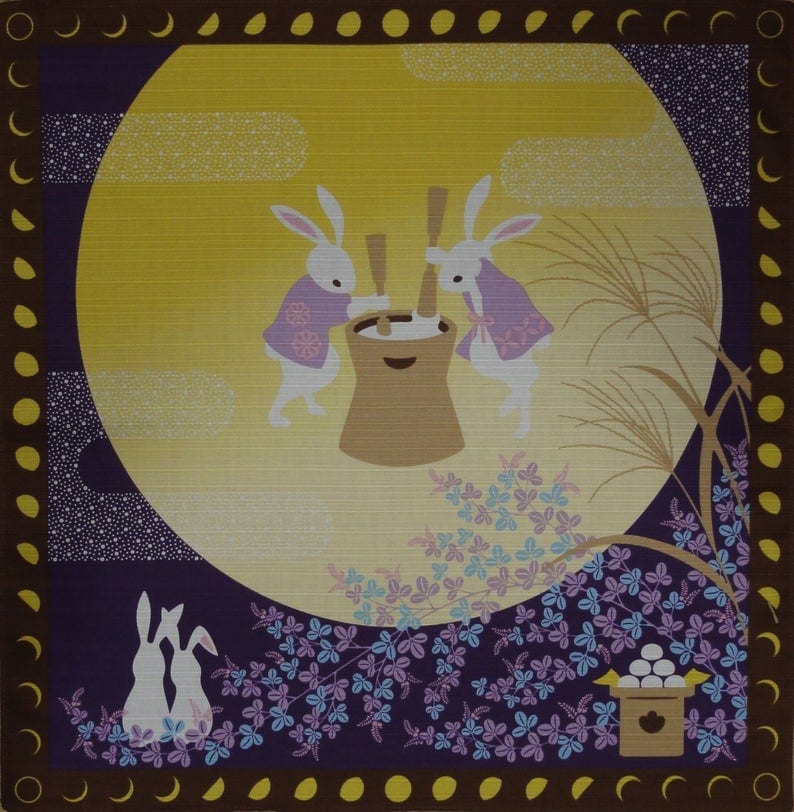 Growing up in the states, when I looked at the moon I saw a man there. I never thought about what he was doing or how he got there, but there he was. I could make out his face, and I took it for granted that other cultures saw the same sort of imagery.

Certainly, Americans aren’t alone in seeing him. But when I moved to Japan, I was surprised to find out that according to folklore, there’s actually a rabbit up there!

It turns out that it’s also quite common to see a rabbit in the moon, as it appears in folklore throughout East Asia and also also in ancient Aztec mythology. And so if you’re looking for rabbit fabric with an Asian flair, it’s likely that you’ll come across motifs connected with this legend.

This rabbit has taken on special characteristics in the Japanese version of the legend, and is often shown in distinctly Japanese scenes, mostly associated with autumn and the harvest moon. The furoshiki cloth above features such a scene, with traditional autumn grasses. Click on the photo to see it and others on amazon. Can you spot the rabbit?

In other posts I looked at some of the celebrated ‘seven grasses of autumn’ which appear frequently on furoshiki cloths and other textiles. The harvest moon is also a common element in such motifs, as are rabbits, playfully hopping through the grasses in the glow of the moon. This has made these designs quite popular among rabbit lovers, as well as those with an interest in Japan and Japanese fabrics.

The rabbit has quite a big role in ‘tsukimi’ moon-viewing festivities and designs such as the Japanese noren split curtain below because he has a place in folklore that forever ties him with the moon in a very significant way.

The rabbit in the moon came to be there, according to Japanese legend, because he passed a test and demonstrated his virtue when he was among three animals called upon to perform an act of charity for someone in need. He literally threw himself on a cooking fire in the service of another, a sacrifice that went went beyond the earnest actions of the others.

If the rabbit hadn’t been the one to commit this supremely selfless act, according to Japanese myth there might instead be a frog or a fox in the moon and on your fabric!

But before you feel too sorry for the others, I should mention that the rabbit isn’t idle up there. He seems to be enjoying his work, but he is certainly keeping busy. He’s making mochi rice cakes, pounding the rice, which has been placed in a mortar.

I can say from personal experience that it’s harder than it looks!

Neighborhoods often have mochi rice cake pounding events during the first few days of the new year, and I have taken part and given the mochi a few good whacks when folks are taking turns at it, and I can say that it would take some stamina and technique to see the whole process through from start to finish.

Not only is the mallet heavy, but the person swinging it needs to take great care in their timing. Accuracy isn’t a big challenge, as the big blob of sticky, pounded rice is an easy target.

But rhythm is crucial because there’s teamwork involved, as a second person is adding water a little at a time and turning the mochi-in-the-making in between impacts so that it won’t stick to the mallet and so it all gets pounded into the same consistency. 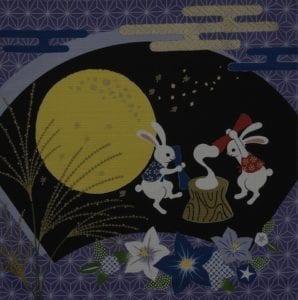 The first time someone passed the mallet to me I underestimated its heft because the welcoming, diminutive elderly lady who put it in my hands had been pounding away with great gusto and had made it look easy! The gentleman who was turning the mochi in the stone mortar as I wielded the mallet showed great faith in a novice’s ability to avoid his fingers and quite nimbly stayed out of the mallet’s way, which all added up to a wonderful time with friendly people, delicious mochi with nary a mishap.

Here’s a short video of some pros pounding mochi during an event at a famous old mochi shop in Nara. They’re showing off their well honed skills here, working at a fast pace and doing stunts to thrill the crowd who, like me, had likely never seen turbocharged mochi pounding like this!

Like the rabbits in the above furoshiki, there are a couple of guys swinging mallets together, and at one point a third even joins in, but usually just one person pounds at a time, for obvious safety reasons. This virtuoso performance is capped by the serving of fresh mochi rice cakes to an appreciative throng of customers.

The mochi in the video is a beautiful green hue because Japanese mugwort(yomogi)has been added. This is lot of fun to watch.  Just don’t try it at home!

You might get the chance to try it for yourself if you head to a Japanese culture festival, as some are held overseas, too. But whether you ever hold the mallet or not, don’t forget to give the next full moon a good look-you might be surprised by what looks back at you!

Kyoto Collection is part of the Amazon Associates program, which means I earn a small amount of money every time you click on a link I provide and purchase something on Amazon at no added cost to you. It will be put to very good use the next time I take my family to the neighborhood revolving sushi joint, and we thank you! 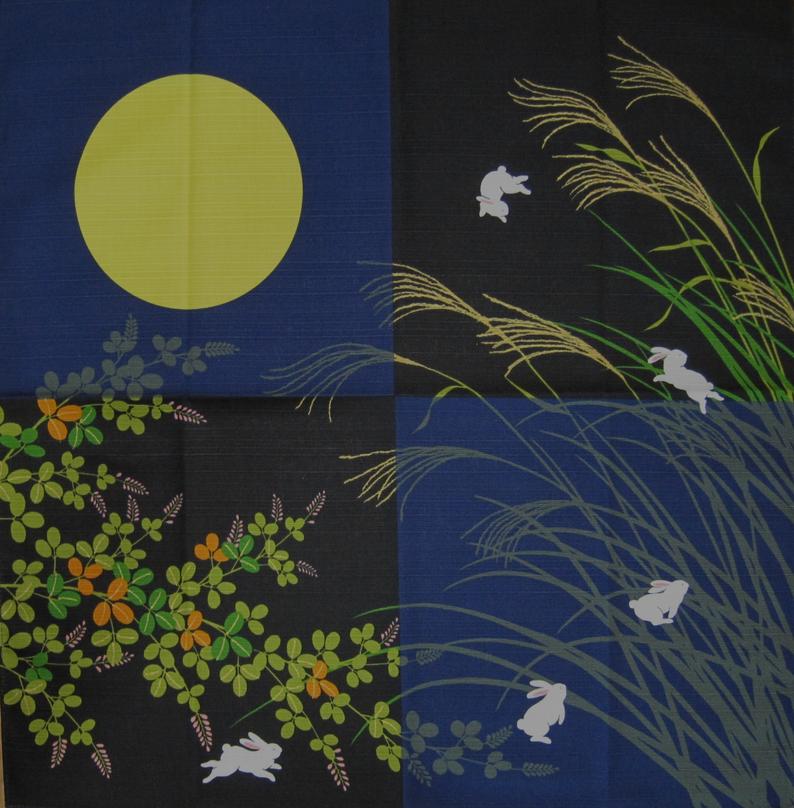 Could you identify the the tall grass depicted in the closeup of the furoshiki in my last post? I mentioned it earlier in that article, and it’s none other than Japanese pampas grass. It’s a mainstay in fall season motifs, often paired with bush clover.

It’s a tall, delicate grass with a lovely ‘tail’ at the top that gives it one of its names in Japanese, obana, which literally means ‘ tail flower.’ And it does look like a horse’s tail, with its chestnut color and gentle swaying as it catches an autumn breeze.

It’s also known as susuki, a name you can remember by associating it with the common surname ‘Suzuki’ and changing the pronunciation slightly so that the first two syllables sound alike.

Here are closeups of two furoshiki cloths with fall season motifs that include both bush clover and susuki. 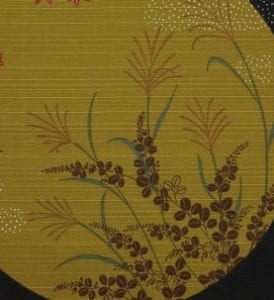 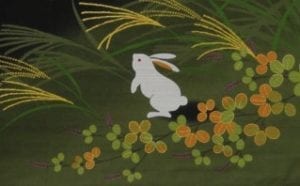 Its height and the way its delicate tassels shimmer in the light make Japanese pampas grass a fixture in classical verse that has so movingly and vividly captured the essence of autumn over the centuries. This ethereal quality is used to great effect on fabrics like these, which depict night scenes with a luminous harvest moon as the centerpiece.

And the moon plays a central role in the furoshiki below, which also highlights our third grass. Kikyo are bellflowers, and it seems that hair ornament designers are as taken by them as textile artists and poets. Their beautiful purple is the inspiration for the overall color scheme of this charming scene with rabbits jumping in the moonlight: 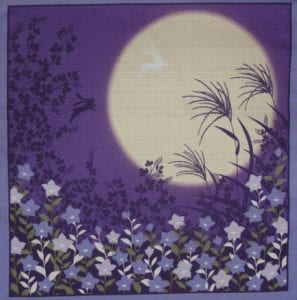 Look closely and you’ll notice bush clover and Japanese pampas grass, and a pair of rabbits jumping in the moon’s glow.  By the time a typically hot and humid Japanese summer starts to wind down I inevitably start to look forward to autumn’s cool breezes and all of its other charms, including these traditional symbols of the season.

As I write these words on a sultry late August Kyoto evening, I’m reminded that another glorious autumn isn’t far away! 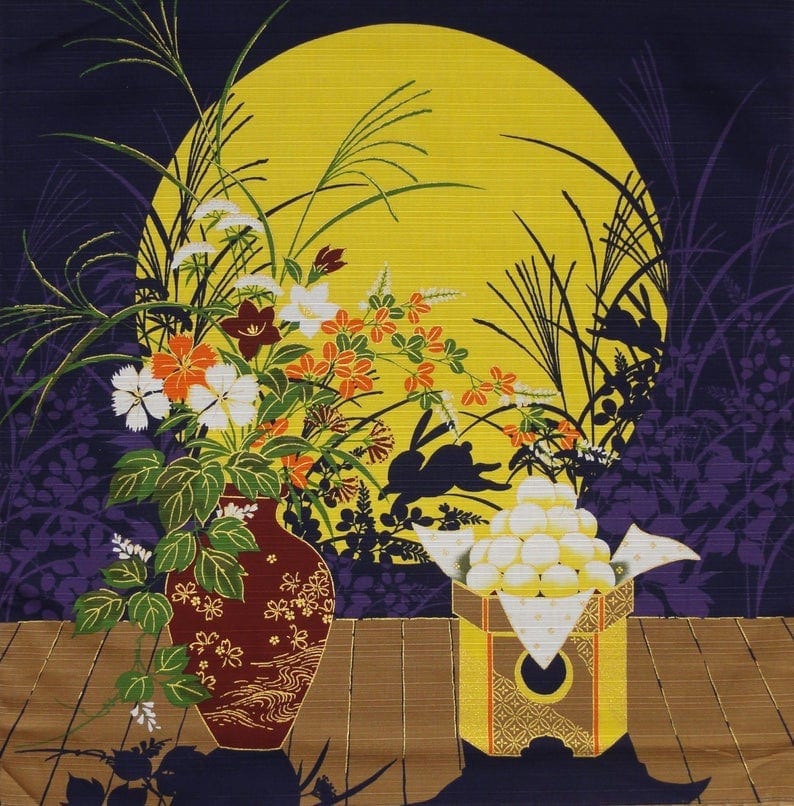 The Japanese have long had a keen awareness of the seasons and a sensitivity to the things that make each time of year distinct. So it’s no surprise that so many furoshiki and tenugui and Japanese textiles in general celebrate the seasons in their motifs.

Over the years though, as I’ve discovered more and more designs to include in my shop, I’ve been struck by how ubiquitous autumn designs are. Why should this be?

One answer might simply be that artists have so many symbols to choose from when they create fall scenes. The case could also be made that autumn is closest to the hearts of many Japanese, and perhaps not coincidentally it’s a time of year when it seems that seasonal delicacies are most abundant and savored.

It’s true of course that spring is well represented, but so much of that as far as textile design goes seems to center on the ephemeral cherry blossoms, or sakura as they’re called in Japanese.

Autumnal motifs on the other hand seem to offer more variety. Even though some themes may dominate, these motifs are often made up of a variety of different patterns and scenes in a single composition.

It’s a delight to focus on a design and give it a chance to reveal itself. When it comes to fall season motifs plants play a central role, and there are actually a set number, seven to be exact, that are known as the grasses of autumn that I’d like to introduce this time.

These have had a prominent role in the way Japanese represent and think about the season since classical times and their names are ubiquitous in literature. They are:

This post and the next will focus on the three that in my experience are most commonly seen on furoshiki and similar Japanese fabrics, obana, hagi and kikyo.

You’ll soon see that the term ‘grasses’ is used in a general sense here and includes a variety of plants. My favorite, hagi, is the one I’ll introduce this time. It’s in peak form in early autumn, usually at some point between the first half of September to the first half of October depending on the place.

Below is a closeup of bush clover from a furoshiki cloth. Bush clover leaves grow in clusters of three oval leaflets. This motif depicts the plant in a typical way with some of the leaflets dissected by a vertical line, which reminded me of coffee beans years ago when I first saw a piece of fabric with a similar scene! 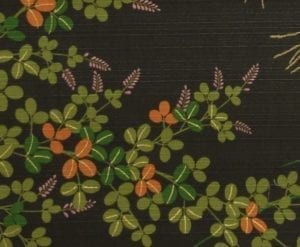 Hagi are known as bush clover or Japanese clover in English. It’s one of many plants I’ve become aware of only since moving to Japan. Until I sat down to write this, I wasn’t sure if it’s even found back home in the states. It turns out that it is, but it has mostly been thought of in the US in practical rather than decorative terms. It’s sometimes used as cover for pastures and as fodder for livestock and in fighting erosion, and even in greening up abandoned mining sites. As it’s a member of the pea family and spreads quickly, it’s well suited for such purposes. So if you live in a zone that’s favorable, this harbinger of autumn might be the perfect choice for your garden, as long as you take care not to let it go unchecked.

Rabbits are also a symbol of autumn and often are shown with autumn grasses, as on the textile below: 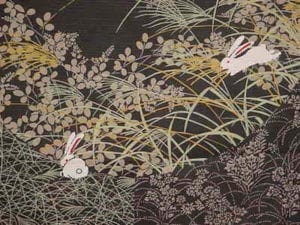 If you look you’ll notice bush clover along with another of the seven grasses-can you name that one as well? No worries if you can’t-that’ll be the focus of anther post!