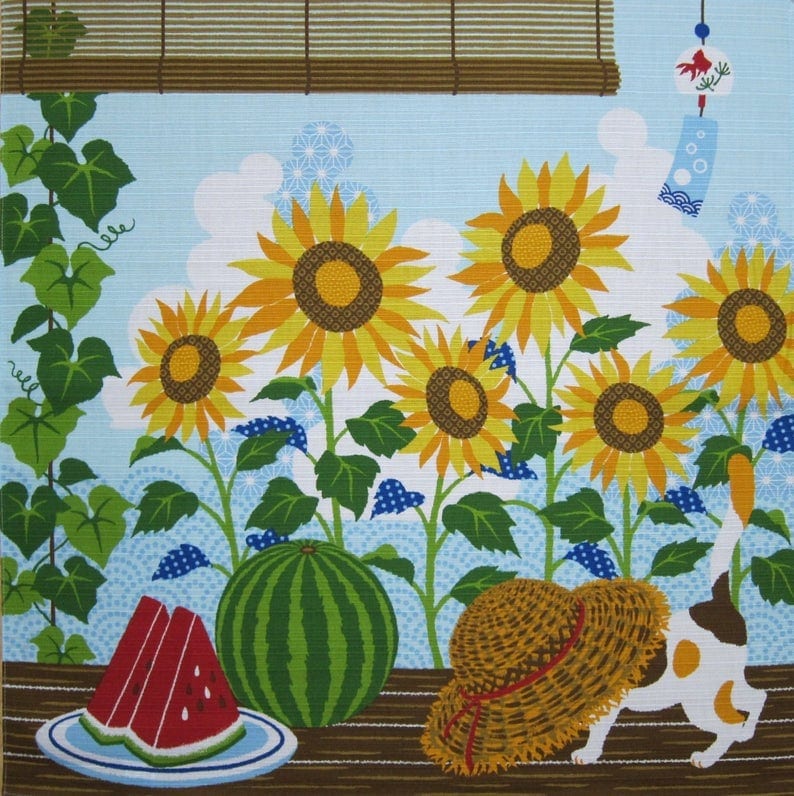 Japan is crazy about its cats, so it will come as no surprise that cat fabric can be found is a wide array of cute designs.

There are cat cafes, various ‘cat islands’ with large numbers of ‘neko’ as they are known in Japanese. And one cat named Tama was even elevated to the position of station master at a Wakayama Prefecture train station, where she attracted thousands of fans and lots of merchandise sales.

Tama is also the name of the cat featured on a series of twelve furoshiki made by a Kyoto company. But this is just coincidence, as Tama is among the most popular and well known names for cats in Japan.

Tama also happens to mean ‘ball’ in Japanese, but the name doesn’t carry that meaning-it’s simply made up of sounds that are pleasing to the ear and have come to have an endearing ring to them. 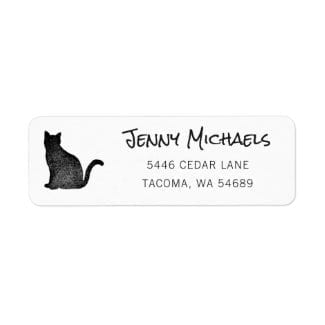 The cotton fabric pictured below is from the Tama the cat furoshiki series and is one of my favorites because it includes various aspects of the culture that I know well from many winter days spent indoors in old, drafty houses without central heating.

This Tama is a native breed called a Japanese Bobtail. They come in various colors, but the calico(mi-ke) variety is the most well known abroad and also has wide popularity in Japan. As such, it’s a good bet that if you see cat fabric that comes from Japan, it could well feature this beloved breed.

Though Tama is snoozing in this scene, as Japanese Bobtails are naturally active and playful, she can be seen out and about among some vivid seasonal scenery in the other designs in the series. The Tama furoshiki featuring her out for a stroll under cherry blossoms shows her in fine, active form.

But while she’s dozing in the design below, you really can’t blame her. ‘Kotatsu’ low tables with heating elements and blankets to retain the heat like the one depicted on the fabric cloth below are indeed magnets for not only cats but also their owners!

And the ‘mikan’ mandarin oranges in the bowl are also fixtures of the season. It’s a good thing they’re so easy to peel, because a little time spent with your legs under a table like this will make anything that takes more than a modicum of effort seem like its just not worth the bother! 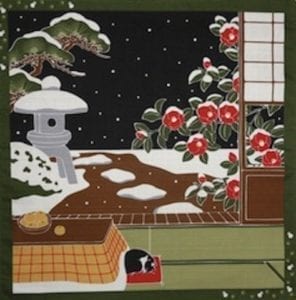 Depictions of cats in Japanese art have a long history, including the work of noted masters of ‘Ukiyo-e’ woodblock prints.

Paramount among them is Utagawa Kuniyoshi, who created numerous works featuring cats in the 19th century. His inspiration was never far away-it’s said that his studio was full of his feline muses!

Recently, in recognition of this, another Japanese furoshiki cloth maker has produced cat fabric that is sure to please cat lovers in and outside of Japan. It incorporates a multitude of cats in fanciful poses taken from his works.

Have a look below and you’ll be hard pressed not to get a sense of just how devoted he was to his models! Click on either of the photos to see it on amazon. 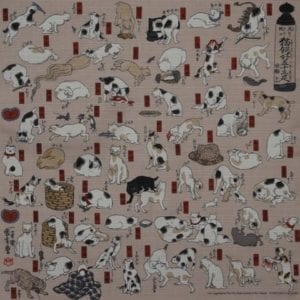 Whether you find it as furoshiki squares as above or as yardage or in another form, Japanese cat fabric has a spirit and a flair all its own.

Look carefully and you’ll see that like Japanese textiles in general, many interesting aspects of this fascinating culture are also illuminated, and the longer you look, the more you’ll find to enjoy!