These distinct, diminutive figures are said to have been created with Bodhidharma in mind. He was a monk who lived in the 5th or 6th century, and is recognized as the founder of the zen sect of Buddhism.

I took the photo below at ‘Darumadera’ temple in Kyoto, which is also well known for its collection of daruma dolls. Gazing at this beautiful work,  I imagined the typical daruma doll, with only its face visible, the rest of it resembling a priest’s robe. Because the doll’s countenance is its most distinguishing feature, it’s easy to overlook what’s framing it.  But when you realize that a daruma doll is cloaked in such a robe, it’s easier to grasp its origins.

Zen Buddhism has garnered attention in the west as a means to cultivate mindfulness. Formal sitting meditation is but one aspect of this training.

In general, it promotes a greater awareness of what’s going on around you, of the reality that exists outside of ourselves and the narrative that our thoughts create, and the resulting lenses that we see the world through.

In this spirit of seeing what is in front of us, I’d like to offer up a simple exercise-take a moment to really look at a daruma!

It occurred to me in writing this that though I have seen hundreds of daruma dolls over the decades of living here in Kyoto, if asked to make a cursory drawing of his face from memory or describe it, I would have little confidence in my ability to recall anything clearly aside from his eyes and his robe!

Daruma dolls made in the traditional way feature a face framed by ample eyebrows and a beard. There’s an understated line representing his mouth that gives him a stoic look, and his robe is embellished with bold but simple brush strokes, often in gold. 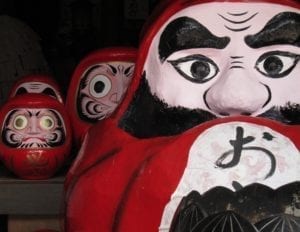 I’ve read that if you look carefully at his stylized facial hair you’ll find cranes in his eyebrows and turtle shells on his cheeks. That very well may be, and I went looking in his eyebrows for cranes and found them, one on each side-then I found others!

So I ended up wondering what I was seeing and what I was imagining! Maybe I’ve found a new use for daruma dolls-as rorschach tests!

Cranes and turtles are both symbols of longevity in Japan, with the crane said to live 1000 years and the turtle 10,000 years. This makes them very common symbols in Japanese art, especially in connection with auspicious occasions like weddings.

Some might color in an eye and make a wish in the same way you’d make a wish when blowing out the candles of a birthday cake.

I can’t remember being disappointed when such a wish didn’t come true, because I never even deeply thought about what I would wish for before the cake was set in front of me. And I knew that I wasn’t committing myself to doing anything to help to make the wish come true.

Personally, I think that having a daruma doll can be a great way to buoy yourself up when you’re striving to attain some goal that you’ve chosen thoughtfully and are committed to working toward attaining.

The reason for this lies in the doll’s association with an often used Japanese proverb, ‘nana korobi ya oki’ which translates as ‘fall down seven times, stand up eight.’ It’s represented in kanji characters on the poster below. 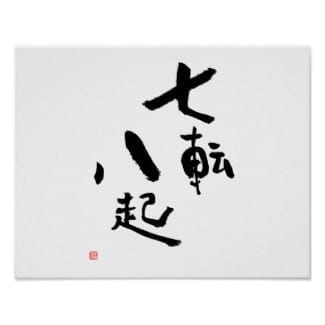 This saying has its roots in zen and quite pithily conveys the essence of zen in its message of perseverance in the face of adversity, resilience, and a stoic commitment to seeing something through.This dedication infers a focus on the present moment and what we can make of it.

Poke a daruma doll and you’ll see why it has become so associated with this saying. Though it might look unstable at first glance and easy to topple, it comes right back up. You can’t keep it down.

I’m about to date myself and American pop culture references can’t do justice to the wisdom and beauty of the expression above. But it does somehow take me back to a TV commercial that I must have seen a thousand times in the 70’s…… weebles wobble but they don’t fall down!

I’ve taken part in some meditation sessions and at times a priest would circulate among us ‘sitters’ and stop at times to hit someone on the shoulder with a piece of wood. It wasn’t hard enough to hurt, but it certainly does tend to bring you back to the moment.

Daruma dolls are very useful for goal setting and achievement as reminders of the goal we’ve set for ourselves. We take the time to clarify the goal and to imagine achieving it when we color in the first eye, and put the daruma doll in a place where it can be seen(and where it can see us!). Over the next year, it serves as a physical manifestation of the commitment felt on that day when a pupil was drawn in that blank space where eyes should be.

And as far as goals go, these days daruma dolls come in a rainbow of colors, which each color purported to help you focus on a specific sort of goal. Gold, for example, predictably is the color of choice if money is what you’re after.  Check out the link to my post about other color meanings at the end of this post.

Let the daruma doll remind you of that as you use your days to challenge yourself by devoting time and effort to your goal, no matter how uphill the process feels at times. And just remember that for better or worse you won’t be pulled back to your focus with a sudden whack on your shoulder, but with a watchful eye!