What do you do with a Daruma doll after you’ve achieved your goal and colored the second eye?

It’s a good question, because there is indeed a protocol for daruma dolls, and for good luck charms in general, and a daruma doll offers itself as a wonderful window onto interesting aspects of traditional Japanese culture.

But at the same time, as you’ll see, there’s no need to feel compelled to do any particular thing, and the key is to act according to your own feelings.

Daruma dolls are associated with New Year’s in Japan and are usually bought at this time. 12 months later at the start of the new year they’re taken to a temple where they’re ceremonially burned in a ceremony called Daruma Kuyou, and a new one is bought.

So If you happen to live near a Buddhist temple that has such an event and you are so inclined, you might take advantage of it. This is a sort of memorial service that offers a chance to reflect on the year that just ended and express gratitude for the good things it brought.

It’s a poignant way to usher in a new year of possibilities, and perhaps to buy a new daruma doll, too! As with other Japanese charms, simply throwing it in the trash is inappropriate.But having said this, parting with your daruma doll is only an option, not a requirement.

The subject of dolls in this context brings hina dolls to my mind as a contrast. Hina ningyo are the set of dolls including an emperor and empress and their court that are displayed at home by families with daughters for Girls’ Day, which is celebrated on March 3rd.

As lovely as the display is, you’ll be very challenged to find any still out after March 4th, as according to tradition, families that don’t put the dolls back in their storage boxes by the 4th risk late marriages for their daughters.

Daruma dolls don’t come with any such caveat and can be kept and displayed indefinitely, if you so choose.

One cozy little Kyoto restaurant that I frequent has one rather large daruma on a shelf on permanent display for each year they’ve been open. It’s a fun way for them to commemorate their years in business and show appreciation to their customers for their shop’s longevity.

Obviously they have no fear of incurring bad luck by keeping their menagerie! Now that they’ve been in business for a dozen years or so, they have quite an impressive row of daruma dolls standing sentinel. It won’t be long before they need another shelf!

We visited Kyoto’s Daruma-dera (Daruma Temple)recently. As the name implies, it’s a temple known for its collection of daruma dolls, and there are over 8000 of them.  I took the two photos below as we strolled the grounds. 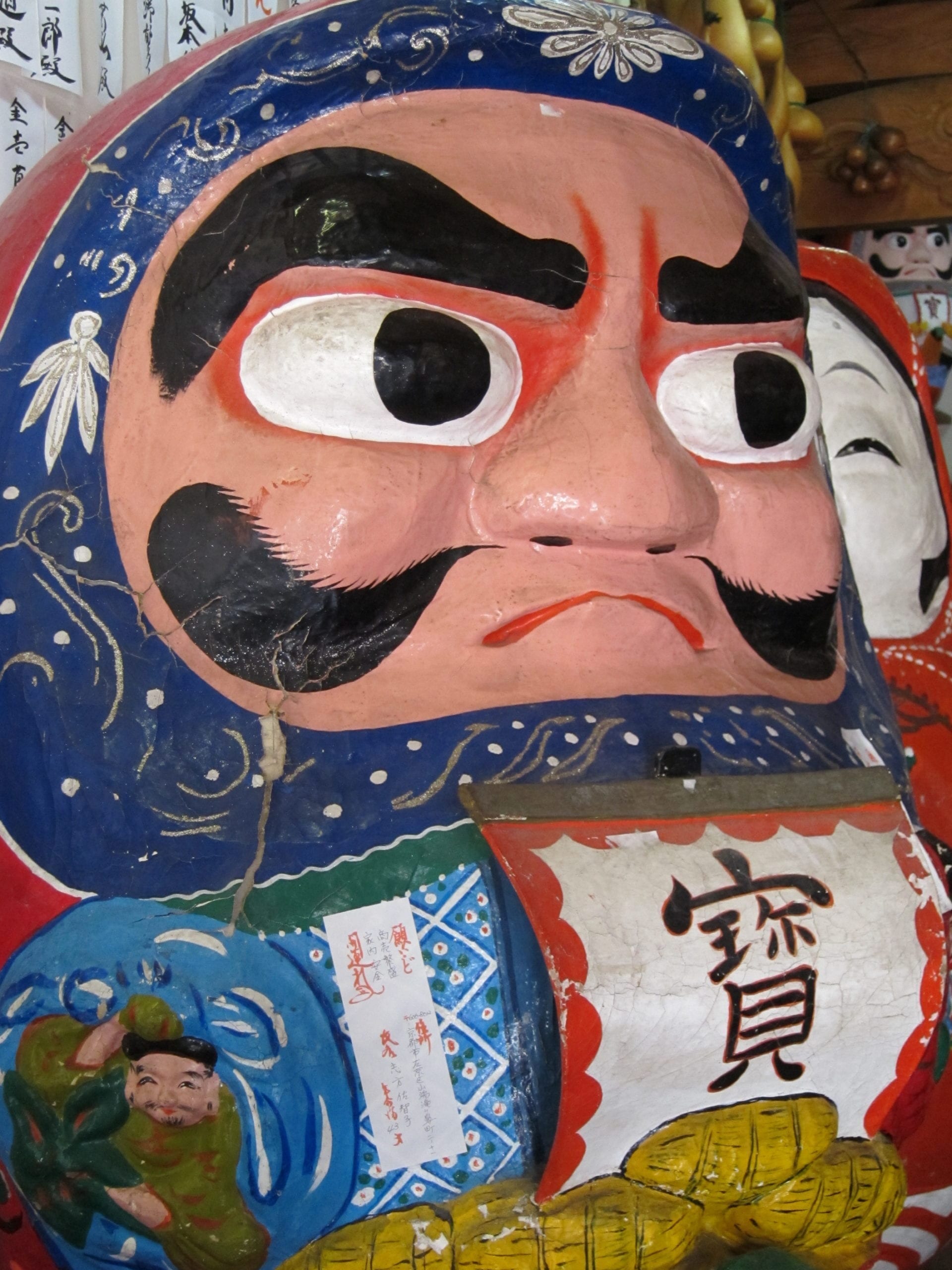 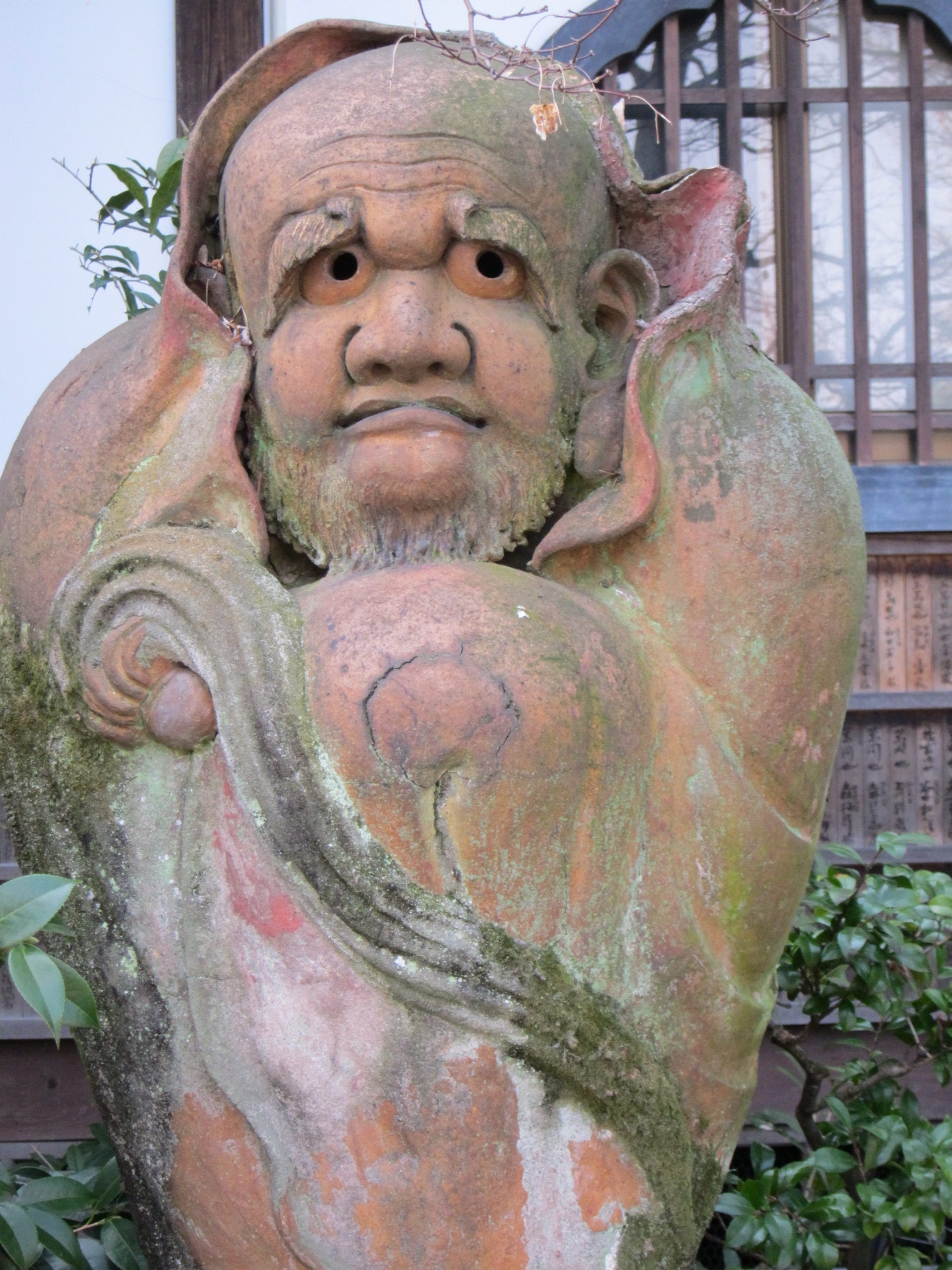 The priest’s wife mentioned one parishioner who kept the same daruma doll for some 30 years, not wanting to part with it. In the end, it was placed in his coffin before his cremation.

This underscored for us her belief that there are no hard and fast rules with this, and the story and the beautiful way in which she took the time to relate it to us gave me a deep sense of her focus on the spirit that the dolls are meant to convey rather than details.

So if you prefer to hang onto your daruma doll after a year has passed, you should by all means do that. One thing to remember is this-display your daruma doll in a place where you can see him, so that you’ll be reminded to take steps, however small, toward the goal you had in mind when you gave him his first eye.

He will serve as a gentle reminder of the principles that bring happiness, which is much more valuable than any luck. This is really where the Daruma’s true power lies, after all.