I’ve written quite a few articles about daruma dolls, and in my research I found a 2004 column by Amy Chavez on the Japan Times website that chronicles with her usual flair, her quest to buy a daruma doll at the Shinmei-ichi Daruma Doll Festival in Mihara.

I hadn’t heard of the festival before, and it sounds like a good excuse to get to know that beautiful area on the Seto Inland Sea in Hiroshima Prefecture better. As the festival has just come and gone for another year though, I’ll have to wait a while before the chance comes around again!

I also learned that Shinmei is another name for the sun goddess Amaterasu, a major deity in the shinto faith.

If you happen to be in Japan some future February, it seems like a fun way to sample local cuisine as well as see lots of daruma dolls!  It’s been held for over 400 years, so it seems safe to assume that it will continue to be a festive February option.

Hundreds of street stalls offer a variety of temptations.  And then there are the daruma dolls. A giant daruma doll is on display and proudly bears the kanji characters 日本一(Nihon Ichi) to signify that it’s the biggest daruma doll in Japan. Check the short video below to see what it you can expect if you go.

Just as there’s no longer just one flavor of pasta sauce on supermarket shelves(Prego makes over 40 now!) daruma dolls also come in a variety of colors these days, to suit different tastes.

Here’s a rundown of the meaning behind many of the most common daruma doll colors, and an explanation of what those kanji characters so often seen on daruma dolls mean as well!

Red is traditionally the color most associated with these dolls, and I’d bet that it’s still the most popular one for dolls sold in Japan.  Red is an auspicious color that some believe has the power to ward off evil spirits, disaster and illness.

The traditional red daruma is said to be modeled on Buddhist priest robes. Shinto too seems to venerate this color, as torii shrine gates through which parishioners pass are either red or vermilion.

When I was reading in Japanese on the history of daruma dolls, I learned that their origin is in China. This comes as no surprise, as so many aspects of Japanese culture have their roots in the Middle Kingdom.

But I was particularly interested to find that when they were introduced to Japan and for some time thereafter they were yellow, as they were in China! This certainly sounds plausible, as it’s natural for adaptations to be made when something is introduced to a new culture, and it could be said that Japan has a particular flair for that.

Red is a celebratory color in Japan and carries with it numerous positive connotations. When people turn 60 in Japan, they celebrate their ‘kanreki’ by donning a jaunty red vest and cap to mark the occasion, which is seen as a sort of rebirth and return to the beginning of the life cycle. Red also has strong associations with victory, which is why political candidates choose red daruma when they’re running for office.

I’m partial to red daruma, so I bought the small one pictured below the other day when we went to a Kyoto temple known for daruma dolls that’s called Daruma-dera. It has a hole drilled in the bottom with an ‘omikuji’ fortune paper inside, and it’s sitting on my table watching me at this moment! 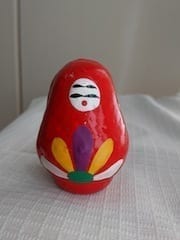 Red daruma dolls invite good fortune in the most general sense, so if you like red and want to go the traditional route, it’s always a good choice.  Mine has eyes that are already painted and a splash of festive hues in a floral pattern that gives it a cheery look.

If you don’t live in Japan and are thinking about getting a daruma doll for yourself or as a gift, a good place to start to get an idea of what’s available is amazon.  Click here to go there and see their selection.

Other Colors and Their Meanings

If you gravitate toward another color or have a specific goal in mind and want to put a finer point on things, there are daruma dolls of various hues that will be happy to call your house their home.

With the recent proliferation of colors though, some online sellers have created sets of ten dolls, each with it’s own distinct look and presumed powers.

This sort of set can be put to especially good use if you’re looking for small Japanese gifts for a good number of friends who are into Japanese culture or who would simply appreciate something unique and fun.

You can find the set of ten petite mini daruma dolls below on amazon by clicking on the photo.

Some popular daruma doll colors and their meanings are:

Purple-health and longevity. Purple is a regal color that is associated with the imperial line, and it’s connected with such qualities as character and integrity.

Yellow-as with gold, there’s an expected association with financial good fortune as well as a more general connection to good fortune.

Gold-wealth and prosperity. The obvious choice of color when career advancement and economic gain are in sharp focus. It’s a natural for a business environment, but it’s also a good fit at home, where a gold daruma doll can add brightness to your decor and motivate you to be active and to harness the energy to do what needs doing.

White-the color of choice for students studying for rigorous school entrance exams that are such a common and stressful rite of passage in Japan.  More generally white is associated with goal attainment.  White also stands for purity, not only in terms of experience, but also in purpose.  So a simple white daruma, perhaps with less gold accents than the one pictured, would be especially apropos for someone who’s practicing a martial art such as karate, judo or kendo.  A white daruma can inspire those who are interested in bushido, the code of honor of the samurai, for similar reasons. White emphasizes the the way, the path, rather than the result in this context. So, while white daruma dolls and goal setting go together, they also remind us to pay attention to the process.

Black-success in business ventures. A good color for entrepreneurs. Just like in English(in the black), the Japanese language refers to black for success in business(kuro ji), and so a black daruma doll will invite such business fortune.  And because it also represents power and strength, black can also promote stability in terms of a business’s money flow. So a black daruma would be a great gift for someone who’s starting a new business venture.

Blue-success in school and the development of the intellect. Blue is also a calming color and so a blue daruma doll can be a good addition to your home or work space.  It can promote a sense of relaxation and serenity.

Green-physical health. Also the development of talent and skill. This ties into the connection between the color green and plants budding, and calls to mind the English expression ‘budding talent.’

Orange-couples who want children choose this color and it also offers protection against disaster.

Peach-this is a color of love and attracts romance and passion.

This is by no means an exhaustive list, as I’ve seen mention of different shades of blue and green, etc.! The furoshiki wrapping cloth below features just a few of the colors that daruma dolls now sport. 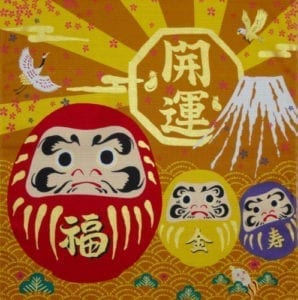 The three daruma dolls depicted on the fabric above happen to not only have different colors, but also different kanji characters written on them. The red one has the most often seen character, pronounced ‘fuku.’  This refers to good fortune in a general sense, which is why it’s so common.

The yellow daruma doll specifically attracts money, and so it includes the character for money, ‘okane.’ The purple doll has a character read as ‘kotobuki’ which is often used for weddings and other special occasions, as it carries the meaning of long life and longevity as well as congratulations.

The two characters in the middle of the rising sun in back of the dolls are pronounced ‘kai-un’ which is another way to convey a message of good fortune.  These two characters in fact are sometimes written on daruma dolls as well.

What color is your daruma doll?