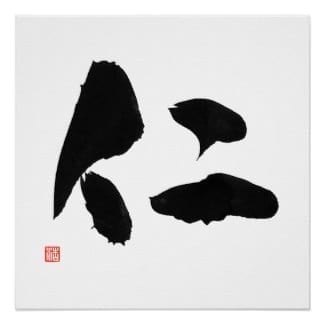 This bushido code kanji calligraphy features a single character pronounced ‘jin’ and represents benevolence and mercy. It’s one of the eight virtues of bushido, the way of the warrior, the set of moral principles that samurai lived by.

The exercise of power must include the ability to restrain oneself from a reflexive tendency to impose one’s own will on others who are weaker. It’s only through reflection and self-control that the powerful come to show mercy for others.

In this sense, the truest expression of power has as at least as much to do with when it is not overtly exerted as when it is.  Compassion and the altruistic acts that often flow from it are the marks of a generous spirit that acts from a foundation of good will.