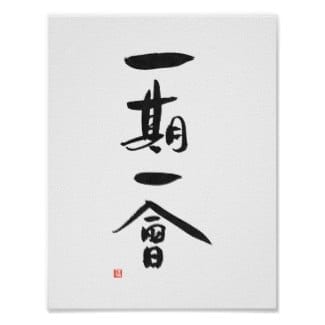 These kanji characters are pronounced Ichigo Ichie and are often translated as ‘one time, one encounter’ or ‘each moment only once.’

The characters are written vertically here, and the character at the bottom, the one with the peaked ‘roof’ over it, is the one traditionally used to write this proverb. But in recent times the character 会 has come into wide use in this context, as the other character is no longer used in everyday contexts.

We have chosen the older character here however, both for aesthetic and historical reasons. It works well with this vertical calligraphy, and it also reflects the history of this saying, which has its roots in the 16th century. Both versions are associated with the Japanese tea ceremony, and can often be seen on kakejiku(hanging scrolls) in tea room tokonoma(alcoves).

We also offer a horizontal version of ichigo ichie separately with the modern kanji character-you’ll see that the horizontal version works nicely on paper that is appreciably longer than it is wide, so you might find that one or another version suits your taste and space better after comparing them.

Tea master Sen no Rikyu is the source of the original expression that these four kanji characters are based on, and it pertains to the tea ceremony in that it is a reminder to the host that the occasion represents a truly once-in-a-lifetime chance that can never be repeated.

This is of course relatively easy to grasp if strangers gather and will soon depart and go their own ways, but it also applies to those who know each other very well and have the chance to meet often, even perhaps in similar contexts. The fact remains that future interactions can never recreate this encounter exactly.

This is indeed a philosophy more than simply a quote or proverb, and it is applicable to myriad aspects of life beyond the confines of the tea ceremony and the host’s role. It speaks to us all in each moment, and beseeches us to see the uniqueness of each interaction, however seemingly inconsequential it may be. Because it is through this practice that we can begin to truly experience a variety of events for what they are-precious and fleeting.

Although Ichigo Ichie has its roots in the world of tea, it also ultimately springs from zen Buddhism and an awareness of transience. Meditation and mindfulness are natural expressions of this teaching, and so it applies to anyone who seeks to live more fully.

In attending fully to others, we attend to the moment, which offers us everything if we choose to see it.

Four-character compounds like these ichigo ichie kanji are referred to as a yojijukugo (四字熟語). There are hundreds, and they’re required study for Japanese children. They appear on school entrance exams, as well as in the conversation of well read people.

They are linguistic gems, conveying meaning compactly, colorfully and profoundly. Brush artist Hiro created this work at his studio in Kyoto by hand. Then we scanned it for use here. Hiro’s red name stamp to the lower left of the calligraphy adds a dash of vibrant color and the black kanji characters written in a bold style on a simple white base give this design a dynamic energy and flow.

Its simple flair and the history behind it make this work a distinctive piece of Japanese calligraphy art that’s just right for spaces with a minimalist decor, be it modern or more folk inspired.