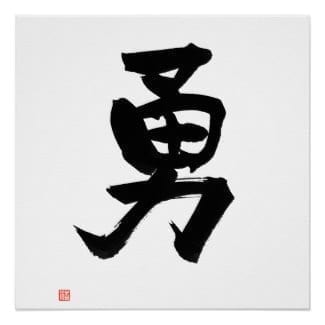 This single kanji character is pronounced ‘yuu’ and represents courage. It’s one of the eight principles of Bushido, the way of the warrior, the code of moral principles that samurai lived by.

When written with a second character, it becomes the Japanese word yuuki, which means courage. Here, in the context of the bushido warrior code, the single character connotes this meaning with simplicity and brevity.

This Japanese calligraphy art featuring the kanji for courage is also available on a postcard in our zazzle shop, and is just one of eight bushido code samurai warrior designs that we offer on other items such as mugs, magnets and keychaiins, too.