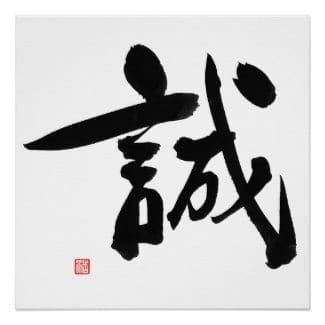 This bushido code kanji for honesty calligraphy poster features a single character that’s pronounced makoto and represents honesty and integrity. It’s one of the eight virtues of Bushido, the way of the warrior, the code of moral principles that samurai lived by.

At its core, adherence to this virtue makes acting in accordance with what one says a necessity.  Sincerity therefore, is an integral component of this. To act disgracefully is to fail to live up to this.  There is a commitment to truth as something beyond what is in one’s self-interest, and an ability to act with fairness and even handedness.