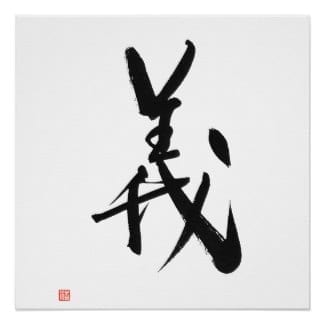 This single kanji character is pronounced ‘gi’ and represents justice, in doing what’s right. Such righteousness necessarily means considering various aspects of something before taking action, so it involves consideration and a commitment to the truth. To commit to truth, it’s vital to accept it even when it doesn’t serve you personally.

In today’s world we think of such things as conscientiousness and of ethical behavior in a similar way.  When we witness corruption and vulgarity in the words and deeds of others, we see a lack of adherence to this principle.

It’s one of the eight virtues of Bushido, the way of the warrior, the code of moral principles that samurai lived by.

This kanji for justice calligraphy is just one of a series of posters and other items that we’ve created based the bushido code of the samurai.