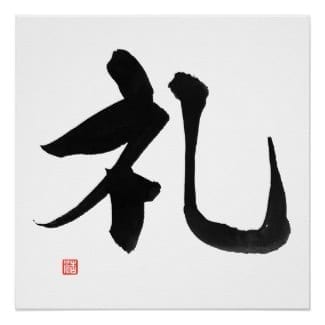 This single kanji character is pronounced ‘rei’ and represents respect. It’s one of the eight virtues of Bushido, the way of the warrior, the code of moral principles that samurai lived by.

We’ve come to think of samurai warriors mainly in terms of the respect that they earned by being valiant in the heat of battle. While this was indeed one aspect of this virtue, rei is a concept that encompasses much more than such heroics.  In fact, one can easily imagine an accomplished warrior’s temptation to be cruel to others who are weaker than him in situations far removed from the battlefield.  To resist such impulses and instead treat others with grace and respect brings one closer to living up to this dictate.

While this character is sometimes defined as politeness, that word’s modern connotations almost inevitably fail to capture its true meaning. Politeness as it exists in modern Japan is certainly a widespread trait that almost undoubtedly has its roots in the feudal past, and when expressed with sincerity it indeed transcends simple social niceties.  It has the capacity to approach true gratitude and even a measure of love. So it’s useful to keep this in mind, without letting modern contexts color this kanji’s meaning too much.

When thinking of respect, there is also the chance that another kanji character could come to mind, namely 敬(kei), part of the two character kanji compound that makes up the word that is often used in everyday conversation in Japanese when talking about respect.